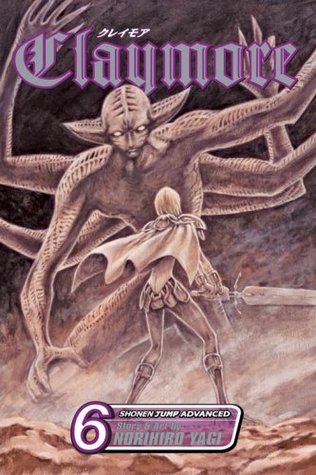 I have a hard time reviewing manga volumes since I can’t say much without spoiling past installations in the series, but a resolution is a resolution and I plan to stick with my goal as long as I can.

Claymore is my absolute favorite anime of all time, spanning 26 episodes and a number of multi-episode arcs. I decided to start reading the manga a few years ago since it continues the story far past where the show ends and I’ve heard that a number of plot lines are different.

Volume 6. The Endless Gravestones encompasses the end of the arc where our protagonist Clare, a female monster hunter known as a Claymore, teams up with three others of her kind to defeat an awakened being. Awakened beings are like a beefed up version of yoma, the monsters that plague this fantasy world. They’re ultra powerful and cannot be killed by anyone except the most capable Claymores.

I love this arc because we get to know more about the mystery surrounding awakened beings, how they came to be and what that means for the world and its characters. We also get some insight as to what sets Clare, Deneve, Helen, and Miria apart from other Claymores. Miria in particular is a character I had wished the anime went more in-depth on so I’m hoping we see her again in future volumes.

This volume is also the beginning of my favorite arc in the whole anime so I’m very excited to see how it originally went down in the books. Clare meets one of the most powerful Claymores alive, an unpredictable psychopath named Ophelia. They are meant to hunt down another awakened being together but Ophelia takes more interest in tormenting Raki, the young boy that Clare travels with and has a sort of motherly disposition towards. Clare and Raki must escape to survive and they leave Ophelia to deal with the awakened being on her own.

This volume was incredibly enjoyable to read and the only reason I’m giving it four stars instead of five is because it’s an “in between” volume. It bookends the end of one arc and the beginning of another and really the best parts are when the full arc is the focus. I have a feeling volume 7 will be phenomenal for this reason.

Sorry to be selling you on Claymore six volumes in but it’s such an amazing story with complex characters in a unique fantasy setting. I really can’t praise it enough.