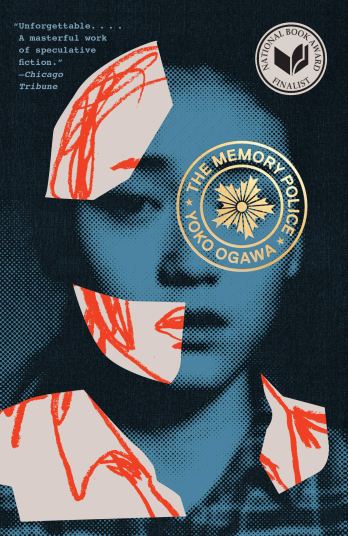 The Memory Police by Yoko Ogawa, translated by Stephen Snyder

A young, unnamed novelist lives on an unnamed island where, one by one, things are disappearing. It’s not too bad at first when things like birds and harmonicas are stripped from everyone’s memory. But as time goes on, more important things begin to go missing, and the rate at which they go missing increases.

A few special individuals on the island have memories that remain intact though. Enter: The Memory Police, an Orwellian organization that makes sure the forgotten items stay forgotten. They show up out of nowhere and take people away in their military trucks, never to be seen again.

When our protagonist’s editor is flagged by the Memory Police, she concocts a plan to hide him away in a secret room in her house.

Ogawa’s writing calls to mind the surreal stories of Haruki Murakami. The characters and places are mostly nameless but I still felt very close to them while reading. The last half of the story reminds me a lot of Kazuo Ishiguro’s Never Let Me Go in terms of its tone and themes of autonomy versus helplessness.

The dystopian elements are rather subtle, unlike similar works Memory Police is being compared to (i.e. Fahrenheit 451 or 1984). Even so, I really enjoyed the chilly melancholy Ogawa’s writing invokes and I think this is a story that will stick with me for quite a while.