Can you believe 2019 is already halfway over? I know I certainly can’t.

Last year I didn’t manage to get this tag out until August so at least this time I’m little more punctual!

Anyway, we’re six months in and I’ve read 36 out of 80 books and I have some thoughts about them. Let’s talk about it.

This has to be Kings of the Wyld by Nicholas Eames. I’ll admit that I 100% bought the book after I saw it online somewhere and thought the cover looked really cool. I don’t think I even read the synopsis. Once I had it in my possession, it sat on my shelf for a couple of months and it slipped my mind entirely.

About two months ago, I imposed a general book buying ban on myself because I’m running out of both funds and space for this vice of mine. As a result I’ve made it a priority to read books I already own.

It seemed like a great time to pull some fantasy titles off my shelf and give them a go. I made a list of ten books I wanted to read and then asked by boyfriend to pick a number. The number he chose corresponded to Kings of the Wyld and rest is history.

I fell in love with this book from the very first page and I’m so blown away by the fact that I hardly ever see it in my online book communities. If you’re interested in a highly underappreciated fantasy novel that will have you laughing and crying the whole way through, pick up Kings of the Wyld. If you need some more convincing, check out my full review of it here.

I’m so surprised to say that this is The Wicked King by Holly Black.

In January 2018, I read The Cruel Prince and I loved it but in the year since, my feelings for it have cooled significantly. It was a good story but it didn’t blow my mind or anything.

I picked up The Wicked King on a whim one morning expecting to read a chapter or two while I had my coffee. Then I looked up and it was seven hours later and I was nearly done with it.

The ending of this book had me yelling. And I don’t mean that in the way people do nowadays when they see something and it makes them exhale a little harder out of their nose so they comment: “omg im literally screaming” when actually their face looks like :I

I was home alone, and I was LITERALLY screaming at Holly Black for putting me through this absolute crucible of a cliffhanger.

Thank the gods Queen of Nothing is getting an early release this year.

3. A new release you haven’t read yet but want to:

What’s my fatal flaw? It’s that I love huge global-scale fantasy stories with sweeping histories and in-depth characters but I quake at the sight of a book more than 500 pages long.

This is my way of saying that I’m dying to read The Priory of the Orange Tree by Samantha Shannon but I am a weak, weak human with fear in my heart.

4. What is the most anticipated release you have for the second half of the year? 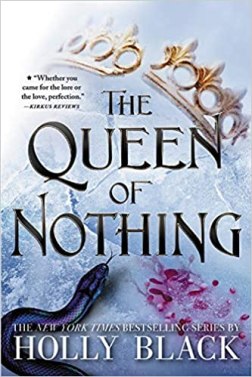 But also I”m excited for: Five Dark Fates, Gideon the Ninth, The Monster of Elendhaven, Ninth House, and Winterwood.

Yikes. Probably Supermarket by Bobby Hall AKA Logic. I like his rap music quite a bit so I was curious to see how well he’d be able to put together a narrative and well…

You’ll hear all my thoughts when Rapid Fire Book Reviews PART II comes out in the next week or so.

Similar to my experience with Kings of the Wyld, I’ve owned Sabriel by Garth Nix for quite some time. I never heard anyone talk about it, or anything else by Nix for that matter.

I posted to Instagram that I was going to be starting it and all of a sudden I got a flood of support from the Sabriel fandom who I guess I just hadn’t been privy to all this time. So many people were telling me it was their favorite book ever and/or that Sabriel was their favorite character.

And wow, this one really caught me off guard. I won’t say too much since I plan to review it fully very soon. Let me just say that since finishing it, I think about Sabriel all the time.

7. Favorite new author– debut or new to you:

Nicholas Eames was a new-to-me author this year and I stan. Anything he puts out from here on, you better believe I’m throwing my money at it. He’s a genius at tone, characterization, and compelling storytelling. These are all things that remind me why I’m a reader.

Are you sick of me bringing up Kings of the Wyld? Sorry, hang on. One of the main characters is this f*cking bonkers old wizard named Moog. Oh, and also? He’s gay. I love my crazy gay wizard. I would take a bullet for him any day of the week.

I reread The Scorpio Races this year, as I do every year. And it made me ugly cry, as it does every year.

Kings of the Wyld. What’s that? I have to pick something else? …Fine.

Night of Cake and Puppets was really adorable and it made me happy to see these characters having some lighthearted times since the DOSAB trilogy was so emotionally heavy.

I think the only book to movie adaptation I’ve seen this year was Harry Potter and the Sorcerer’s Stone which is a classic.

Honestly the Rapid Fire Book Reviews were a lot of fun to write even though they were an exercise I created because I was so horribly behind on my real book reviews.

I think my favorite full review was either Kings of the Wyld or The Way of Kings. Both books easily earned the five star ratings I gave them. Sure, it’s fun to drag a crappy book through the mud sometimes but I much prefer to sing praises for books that were clearly a labor of love.

14. The most beautiful book you’ve bought or received:

King of Scars or The Priory of the Orange Tree— one looks like it’s been dipped in molten gold and the other looks like the art found on some ancient magic scroll. *insert six heart eyes emojis*

15. What books do you need to read by the end of the year?

Children of Blood and Bone, Clash of Kings, East, Gemina, Hex, The Hunger Games, Kill the Farm Boy, Lirael, Muse of Nightmares, Nevernight, Priory of the Orange Tree, Red Sister, Ruin of Kings, Six of Crows, Tess of the Road, Tithe, Watership Down, The Wolf in the Whale, Words of Radiance. …Just to name a few.

What books have you enjoyed the most so far this year? Which ones did you not enjoy as much? Let me know in the comments!

Wishing you all a magical weekend!